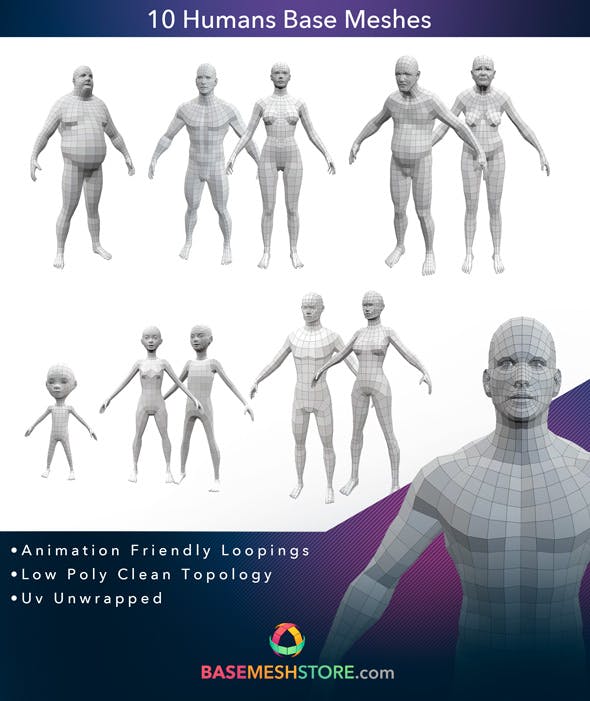 Clean and Low Poly: Using well-positioned polygons, only where they’re needed is key. The low poly count is not only ideal for games, but it also makes adaptation and reuses in an eventual retopology much easier.

100% Quads: Edge loops of arms, legs, and head are always in pairs, avoiding triangles on geometry as it can generate artifacts while sculpting and animating.

Symmetrical: The models are symmetrical, always with an edge through the middle, therefore avoiding problems in a mirroring.

Eyes and mouth: Models have separated meshes for the eyes and the internal cavity of the mouth.

Ready to use: Models are in true size scale. The pivot’s Y axis is up, with 0, 0, 0 as the world position. Every detail is taken care of, so the artist doesn’t have to worry about, just import it to you 3D software and you’re all set.

No overlapping: All Uvs are open, without overlapping. Big UV packs are important so that you have minimum cuts on the model without texture deformations, contributing to easier repositioning and editing.

Hidded seams: The seams are hidden, for instance: On the back of a human, underneath an animal or on a transition point between the sides of a wing.

Same Direction and Avoid Diagonal UVs: The UV’s are positioned in the same direction, either vertical or horizontal. So, when light hits the normal texture, it won’t have inverted details. Diagonal UVs are also avoided, as they cause ugly sharp pixels when put into lower resolutions (usually found in mobile games).

Face loopings: The eyes, jaw, nose and mouth loops all follow the facial musculature. The same flows are present in both high and low poly models.

Pecs and shoulders: In the chest region, the polygons meet the first arm muscle (Deltóide), following so the arm movement. On their perpendicularly, have loops follow the open-and-close helping so the complete arm movements.

Elbow and knees: The movement of areas such as the knees and elbows follow the scheme on the right. This makes the models have edge loops that hold deformations even with sharp movements.

This item was featured on 3DOcean

View Portfolio
7 Sales
1 Comment
Item Rating:   Minimum of 3 votes required
This item may not be property released.
© All Rights Reserved Basemeshstore
Contact the Envato Market Help Team
Quick Links Explore popular categories
by
by
by
by
by
by