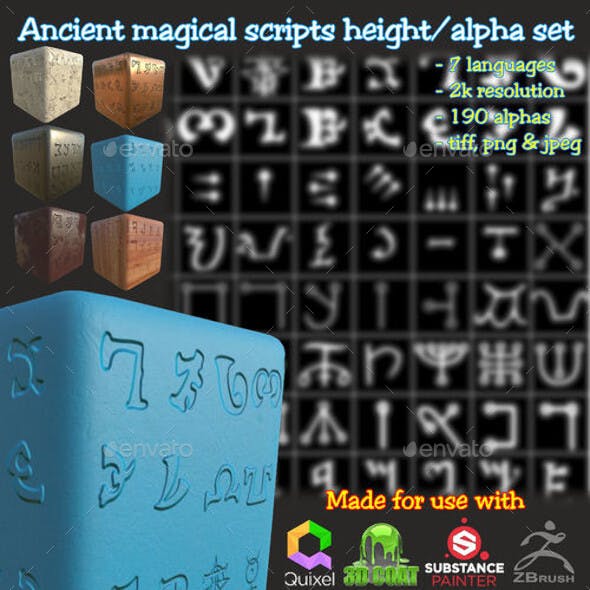 suitable for most 3d painting applications.

Enochian is a name often applied to an occult or angelic language recorded in the private journals of John Dee and his colleague Edward Kelley in late 16th-century England.[3] Kelley was a spirit medium who worked with Dee in his magical investigations. The men claimed that the language was revealed to them by the Enochian angels. The language is integral to the practice of Enochian magic.

Theban is also known as the Honorian alphabet or the Runes of Honorius after the legendary magus (Theban is not, however, a runic alphabet), or the witches’ alphabet due to its use in modern Wicca and other forms of witchcraft as one of many substitution ciphers to hide magical writings such as the contents of a Book of Shadows from prying eyes. The Theban alphabet bears little resemblance to other alphabets, and has not been found in any previous publications prior that of Trithemius.

Alphabet of the Magi is the modern name of a variant of the Hebrew alphabet used for inscriptions in talismans in 17th-century occultism.

The Daggers alphabet or Alphabet of Daggers, is cypher based on the Latin alphabet and used for magical purposes. It appears in Aleister Crowley’s The Vision and the Voice.

appollonian A late-medieval secret alphabet which has been recorded in a number of versions, usually with a Greek mapping

The Malachim alphabet is derived from the Hebrew and Greek and Arabic alphabet alphabets. It was created by Heinrich Cornelius Agrippa during the 16th Century and is still used by high degree Freemasons to a limited extent.

Transitus Fluvii (passing through the river in Latin), or Passage Du Fleuve (in French), is an occult alphabet consisting of 22 characters described by Heinrich Cornelius Agrippa in his Third Book of Occult Philosophy (Cologne, 1533, but written around 1510). It is derived from the Hebrew alphabet

The Celestial Alphabet, more commonly known as Angelic Script, is an alphabet described by Heinrich Cornelius Agrippa in the 16th century. It is not to be confused with John Dee and Edward Kelley’s Enochian alphabet, which is also sometimes called the Celestial alphabet

View Portfolio
This item may not be property released.
More Attributes Fewer Attributes
© All Rights Reserved lordsquirrelus
Contact the Envato Market Help Team
by
by
by
by
by
by