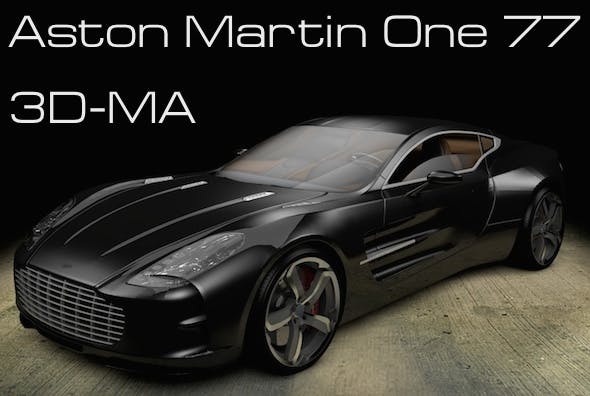 The Aston Martin One-77 is a two-door coupé built by the British car manufacturer Aston Martin. It first appeared at the 2008 Paris Motor Show, although the car remained mostly covered by a “Savile Row tailored skirt” throughout the show, before being fully revealed at the 2009 Geneva Motor Show, and deliveries from the beginning of 2011.There was a limited run of 77 cars, giving part of the name of the One-77, and sold for GB £ 1,150,000. ($ 1,928,205 USD).

The Aston Martin One-77 has been awarded with several internationally renowned design awards including the Concorso d’Eleganza Design Award for Concept Cars and Prototypes, the GOOD DESIGN award by The Chicago Athenauem: Museum of Architecture and Design in North America and the “Best Design” award by the UK motoring magazine Auto Express and many others.

This Model has is clear structured so it will be easy to customise. To change the body colour for example, just place your colour on the “Body” group within the “Exterior” group. By default it´s shiny black, but a Ferrari Red texture called “Lack” is included as well. I fitted this Model with red Brembo caliper and custom rims. I will add the original caliper and rims with an update if demanded. Feel free to ask any questions. Thank you

View Portfolio
0 Sales
0 Comments
Item Rating:   Minimum of 3 votes required
This item may not be property released.
© All Rights Reserved DA-3D
Contact the Envato Market Help Team
Quick Links Explore popular categories
by
by
by
by
by
by