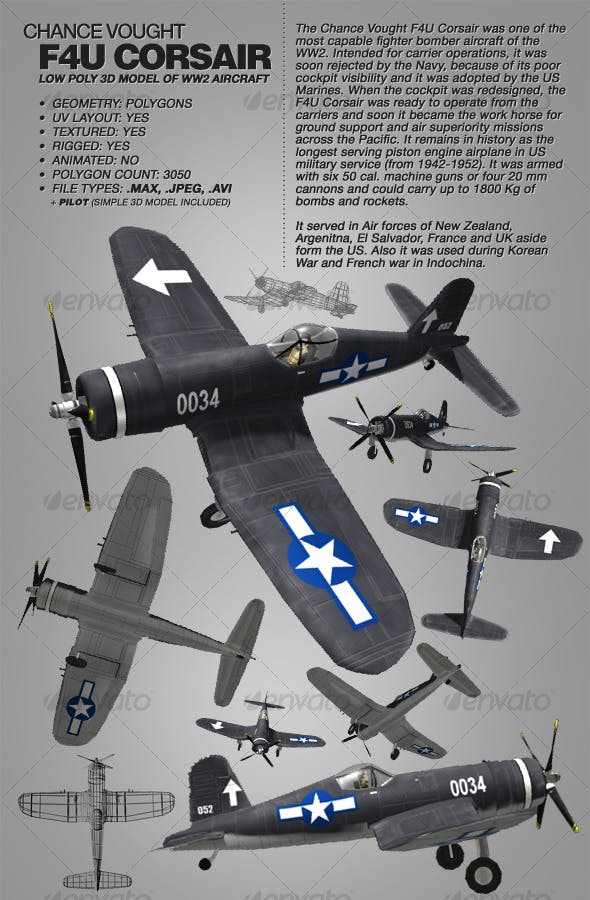 The Chance Vought F4U Corsair was one of the most capable fighter bomber aircraft of the WW2. Intended for carrier operations, it was soon rejected by the Navy, because of its poor cockpit visibility and it was adopted by the US Marines. When the cockpit was redesigned, the F4U Corsair was ready to operate from the carriers and soon it became the work horse for ground support and air superiority missions across the Pacific. It remains in history as the longest serving piston engine airplane in US military service (from 1942-1952). It was armed with six 50 cal. machine guns or four 20 mm cannons and could carry up to 1800 Kg of bombs and rockets.

It served in Air forces of New Zealand, Argenitna, El Salvador, France and UK aside form the US. Also it was used during Korean War and French war in Indochina.

Other graphic & PSD files: me [nykk]

View Portfolio
This item may not be property released.
More Attributes Fewer Attributes
© All Rights Reserved djnick
Contact the Envato Market Help Team
by
by
by
by
by
by