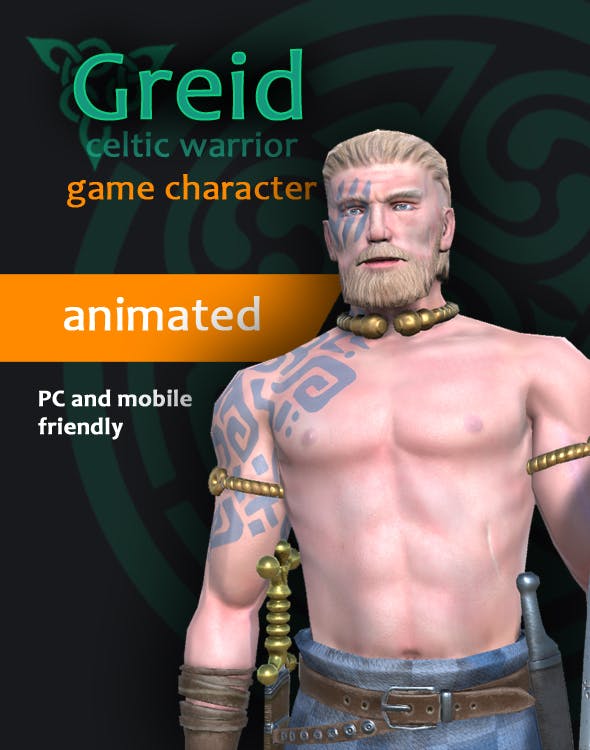 Two types of weapons and color variations for clothes and accessories.

Contents of this package

Base model contains ~5300 vertices,30 bones rig and 2 sets of equipment for non-battle and battle modes.Each should be used and turned on in corresponding animations,which will be specified later. These sets includes “shield_mesh” and “sword_mesh” for non-battle,”shield_deployed_mesh”,”sword_deployed_mesh” and “axe” for battle mode. Also scabard and knife meshes can be switched off if needed.

Textures have been created for Unity game engine version 5.3.2f1. If you intend to use it in another game engine,texture tweaks might be required.

The package also contains “PS_Layers” folder with several .png images for different color schemes of pants and shield.Also you can switch between 2 types of tattoos,or switch it off at all.Images are numbered for easier building of photoshop document.The reason I haven’t included the PSD file is the size-PSD is 4 times larger than all pngs for it together.:)

Feel free to experiment with animations in different modes,switching off and on two sets of equipment.

View Portfolio
1 Sale
0 Comments
Item Rating:   Minimum of 3 votes required
This item may not be property released.
© All Rights Reserved DSense25
Contact the Envato Market Help Team
by
by
by
by
by
by