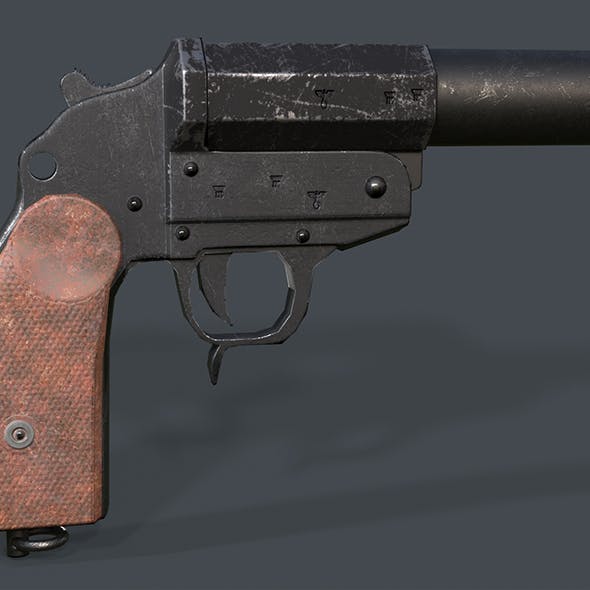 The model consists of 2596 polygons. Has PBR textures for the PBR Metallic-Rouge pipeline.

Leuchtpistole (Leu.P.) designs by F. Walter, adopted by the Reichswehr in 1928 (Model 1928) All the main parts – the frame and the barrel of the signal pistol mod. 1928 – made of steel. In the upper part of the frame there was a hole for attaching the pin of a removable butt. The Walther Leu.P. was used to shoot powerful signal cartridges of special purpose R-patrone and M-patrone, which gave a strong recoil.

According to Western experts, from 1928 to the early 1940s. from 100 to 150 thousand Walther flare pistols of 1928 1934 samples were produced. Lighting cartridges worked at a height of 25 meters, the maximum height was 80 meters, the duration of burning was 6-15 seconds. During the day, in good weather, the illuminating cartridge (rocket) could be distinguished at a distance of up to 2.5 kilometers. At night, the rocket illuminated a section of the terrain with a radius of at least 100 meters, and if cartridges with a parachute were used, then the duration of burning reached from 1 to 2 minutes.

View Portfolio
This item may not be property released.
More Attributes Fewer Attributes
© All Rights Reserved M_StudioPro
Contact the Envato Market Help Team
by
by
by
by
by
by