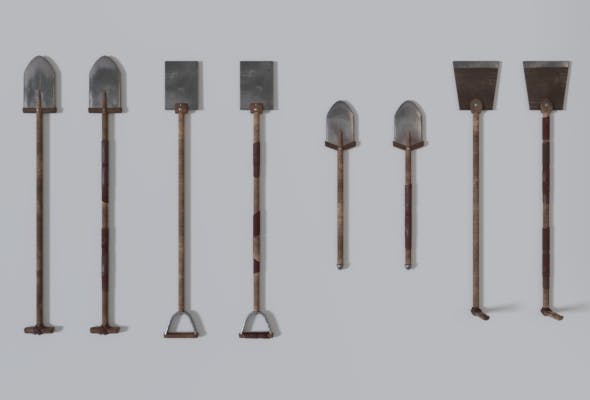 This collection of medieval themed shovels contains 4 types of shovels/spades. All of them are made to match exact measurements of average shovel lengths (1.3 meter), and the diameters of the handles are also made to be the average of most shovel poles. This means that it should match up to any on-scale character.

Within the pack, their are 2 variations of each shovel type. One is strapped the other is plain. They have separate texture files and can be used separately in a game engine without problems.

Each spade has it’s own separate 2K texture.

If you’re using blender, the blend file has all the materials already set up in the node editor, so it’s plug and play!

The textures itself are made in a PBR workflow. In the textures folder you’ll find the “Default” (separated into the normal diffuse, normal, metallic etc.) and “Unity” (Which is the textures exported for compatibility in Unity3D.)

View Portfolio
0 Sales
0 Comments
Item Rating:   Minimum of 3 votes required
This item may not be property released.
© All Rights Reserved Feudal_Anarchy
Contact the Envato Market Help Team
by
by
by
by
by
by