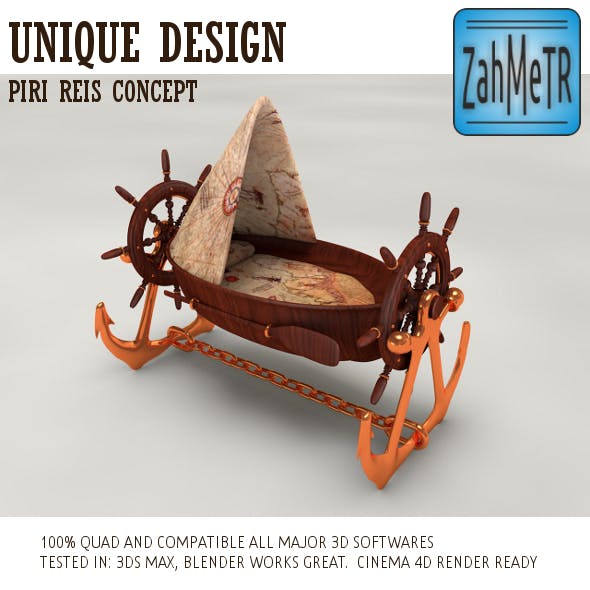 I designed, modelled, created this model for a design competition about Piri Reis.

Pirate Boat Crib Piri Reis Concept Rocker 3d model has only ” 5444 ” polygons (non smooth) and 100% quad modelled in cinema 4d. All items are named sperated and easy to find. Worked on Uv map only for textile areas. Check preview images and video preview. Cinema 4d materials – scene render ready. So you will get this same result when render what you see on preview image.

If you have a question or suggestion send me an e-mail on my profile page. The answers will be lighting fast.

Dont worry about mesh smooth, turbosmooth, or subdivide: The model tested in 3ds studio max and blender. Works great. Just pick a file format or import obj file and enjoy. The crib can be use in any sleeping kids interior visualisations, game, advertising, film, animation or etc. All suggestions are welcome. If you want any model like this just ask me. Will be happy to create and serve you and all envators.

View Portfolio
0 Sales
1 Comment
Item Rating:   Minimum of 3 votes required
This item may not be property released.
© All Rights Reserved zahmetr
Contact the Envato Market Help Team
Quick Links Explore popular categories
by
by
by
by
by
by