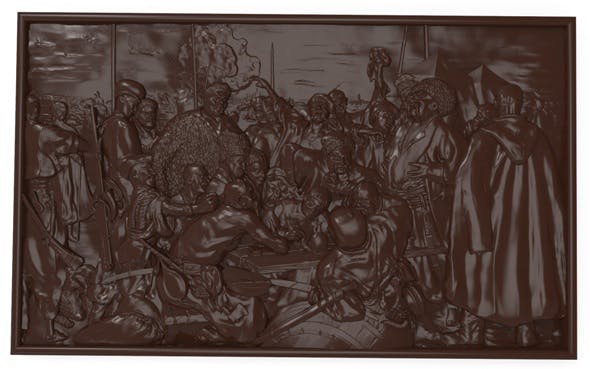 Bas relief of the painting “Reply of the Zaporozhian Cossacks” is recreated in high polygon 3D model (STL and OBJ formats).

Reply of the Zaporozhian Cossacks to Sultan Mehmed IV of the Ottoman Empire, also known as Cossacks of Saporog Are Drafting a Manifesto, is a painting by Russian artist Ilya Repin. The canvas was started in 1880 and finished in 1891.

Reply of the Zaporozhian Cossacks depicts a supposedly historical tableau, set in 1676, and based on the legend of Cossacks sending a reply to an ultimatum of the Sultan of the Ottoman Empire, Mehmed IV. The original reply, if it ever existed, has not survived; however, in the 1870s an amateur ethnographer from Yekaterinoslav (today Dnipro), Ya. Novitsky, found a copy made in the 18th century. He gave it to historian Dmytro Yavornytsky (1855-1940), who by chance read it to his guests, among whom was the painter Ilya Repin. Repin became curious about the story and in 1880 started the first of his studies.

Zaporozhian Cossacks (from ‘beyond the rapids’, Ukrainian: za porohamy), inhabiting the lands around the lower Dnieper River in Ukraine, had defeated Ottoman Empire forces in battle. However, Mehmed demanded that the Cossacks submit to Turkish rule. The Cossacks, led by Ivan Sirko, replied in an uncharacteristic manner: they wrote a letter, replete with insults and profanities. The painting exhibits the Cossacks’ pleasure at striving to come up with ever more base vulgarities. During Repin’s time, the Cossacks enjoyed great popular sympathy. Repin also admired them: “All that Gogol wrote about them is true! A holy people! No one in the world held so deeply freedom, equality, and fraternity.”

This 3d model is prepared to physical production by 3d printing, CNC machining, also for making a mold for casting in gypsum, plastic, metal, chocolate, etc. Also it can be used for interiour design and vizualizations.

If you need more bas reliefs, click to ‘moshchan’ link on the right to see my other products.

View Portfolio
0 Sales
0 Comments
Item Rating:   Minimum of 3 votes required
This item may not be property released.
© All Rights Reserved moshchan
Contact the Envato Market Help Team
by
by
by
by
by
by