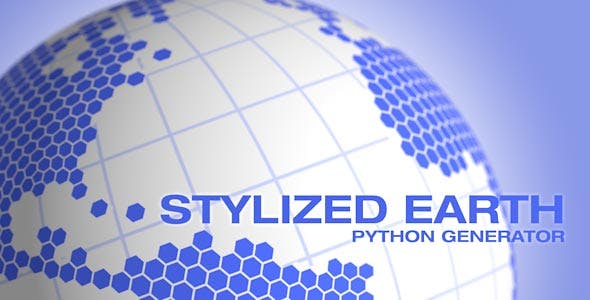 Stylized Earth Python Generator is a Cinema 4D scene designed to help quickly create a unique representation of Earth. Its style draws inspiration from dot matrix printing. Instead of ink dots, elements are created with mesh that wrap around a sphere. The size, shape, layout and textures of these elements are customizable allowing for many different designs.

Stylized Earth implements a Cinema 4D Python Generator in combination with User Data to generate geometry based on the grayscale levels of an image.

Can be used in combination with a Mograph Cloner Object set to Object Mode. Below Stylized Earth is set to Disco Grid Mode and objects are cloned at its polygon centers.

Download includes another Cinema 4D Python Generator that will quickly produce a grid with custom numbers of latitude and longitude lines. It internally sets up Sweep Objects with a custom contour spline.

Also includes a Python script designed to be executed inside Cinema 4D that generates a bitmap with even width lines from north to south poles when projected on a sphere.

View Portfolio
11 Sales
0 Comments
Item Rating:   Minimum of 3 votes required
This item may not be property released.
© All Rights Reserved buckplugs
Contact the Envato Market Help Team
by
by
by
by
by
by