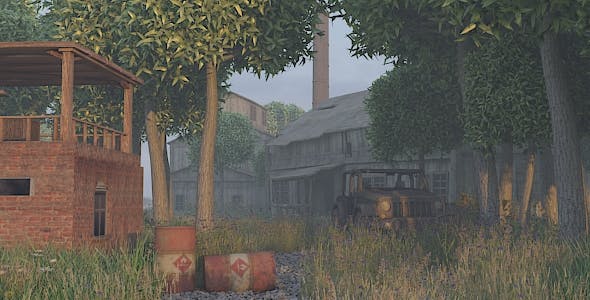 This scene was created based off natural ideas conceptualized in house for a game level. The scene has been created to scale and accurately according to the initial idea.

The story behind it:

“Long ago before the technological revolution, there was a small bustling town named Roundtree Hill that existed secluded from the noisy city life with a population of 644 people. This town thrived on the lumber produced from the forest and coal produced from the mines. As new methods for energy production came about and other sources of fuel became more popular Roundtree Hill slowly grew smaller and smaller each year until it’s unfortunate abandoning around 1939.”

This scene has been provided with well grouped objects and setup has been optimized to make the experience a breeze for you.

The project files also include various textures needed for all assets in the scene. These have also been optimized to ease the setup process before rendering.

Thank you for your interest in this product.

View Portfolio
0 Sales
1 Comment
Item Rating:   Minimum of 3 votes required
This item may not be property released.
© All Rights Reserved CognitivS
Contact the Envato Market Help Team
Quick Links Explore popular categories
by
by
by
by
by
by